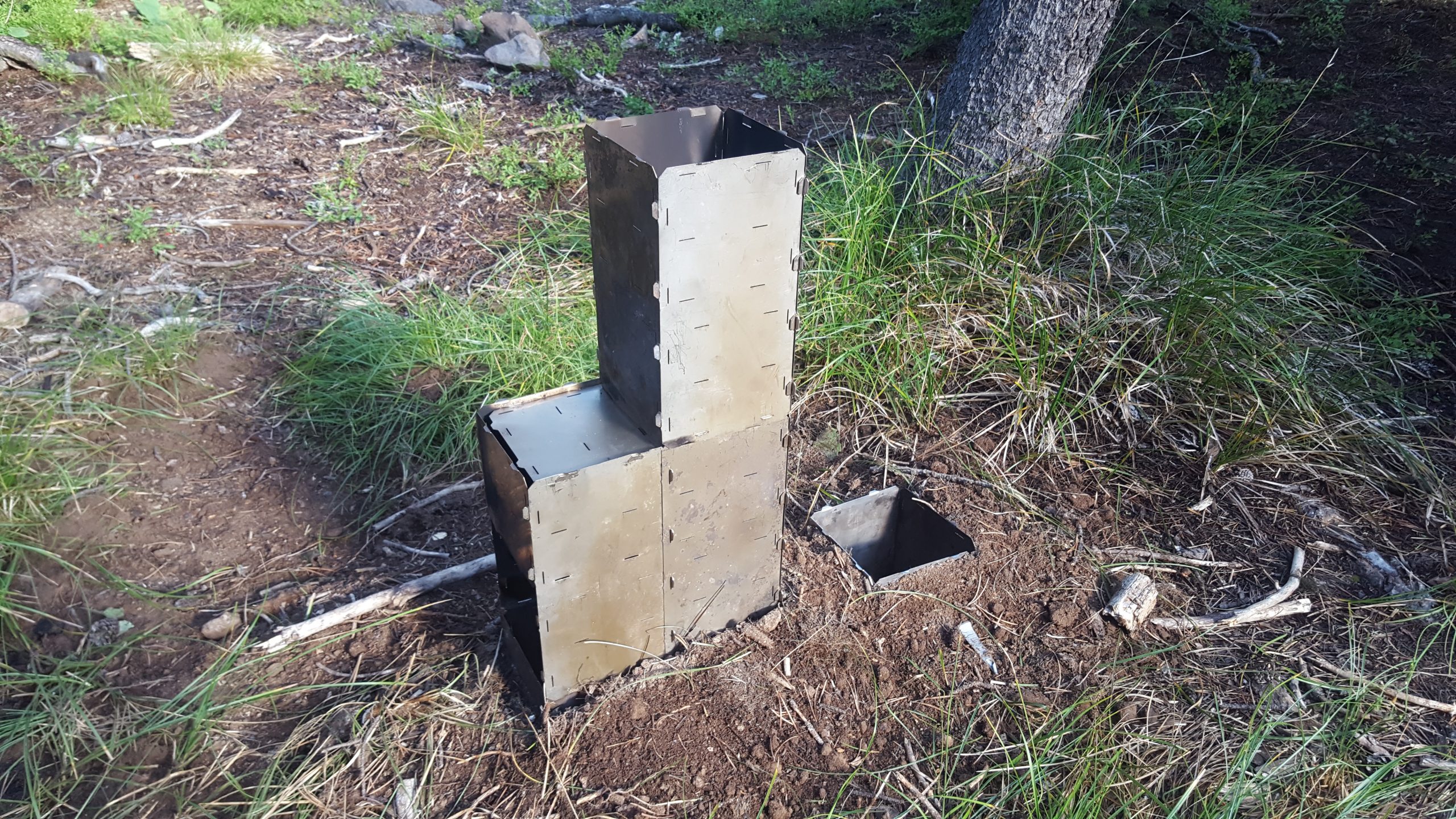 The Deuce is like getting a great deal on Two Bush Runner kits. Our stoves are modular, so it’s simple to double up and get more functionality. The flagship configuration of this particular little kit is a tiny potbelly style stove with a short chimney. Because it’s two Bush Runner stoves it gives you two working Dakota style fire pits as well. It also gives you up to four lightweight rocket stoves.

Because the Deuce configuration resembles a tiny potbelly stove with a short chimney,  it makes an ideal two-tier cooking stove. With it you can cook your morning camp breakfast and brew a pot of coffee with minimal fuel.

The Dakota Fire Hole style base of this stove allows you to bury it in a small pit and nearly eliminate the smoke. This is great for several obvious reasons. First and foremost it means no smoke in your eyes.

Perhaps more importantly though, it means you can nearly eliminate the smoke you produce while using your StealthFyre Deuce inside a primitive Bushcrafting shelter. It also means that if you find yourself in a situation that requires stealth you’ll have a stove that won’t send a giant location signal into the air. In fact, you’ll have two.

The Deuce Is More Than One Stove

It’s important to note that the Deuce is simply the combination of two smaller packages of StealthFyre panels. This quite literally means that with your purchase, you get at least two functioning stoves. This is a great deal because if you only ever use one type of configuration, you’ll still have enough panels for a back up stove if necessary. Remember, two is one and one is none.

Understanding the modularity of StealthFyre is key to understanding the sheer amount of versatility at your disposal. Thanks to the inter-lockability of the panels and their unique shape, you’ll be able to build Dakota style smokeless fire pits and potbelly stoves of several different sizes. You’ll also be able to connect the potbelly stoves to the fire pits to gain even more functionality and efficiency.

While not being a very lightweight stove in its entirety, The Deuce is an incredibly compact one. It packs up to be roughly twice as thick as the Bush Runner, but not much longer and wider at 9 1/2″X5 1/4″X1″. That’s not bad at all for a small camping stove that can be assembled in more than a dozen fashions. With all that compact steel of course, comes a fair amount of weight.

Still, the versatility alone makes this stove great for bicycle campers and others that are worried about weight, but not so much as the space they have to carry everything they need.  The pack size of the StealthFyre line of modular stoves was one of the key considerations when it was designed. We wanted a stove that would be large enough for camp cooking duties, but small enough to fit in the saddle pouch of an expedition pack.

The resulting system has ended up being a stove kit that only grows marginally in size while adding more panels. This means that even our largest kit is still very easy to pack away into tight spaces even in spite of its notable weight.  Have you ever wanted to have a potbelly stove with a five foot chimney that could fit in the bottom of your center console and still leave plenty of room for gear? That’s what we mean by compact.

Because the StealthFyre concept is based on modularity, it means you can expand your kit at any time by adding another. All of our kits contain a variation of the same basic panels. Our Deuce kit is a great choice for bicycle campers, stealth campers, and anyone else that doesn’t care as much about weight as they do space. It also makes a great addition to some of our larger kits and can supply the much needed panels to lengthen a chimney tube for primitive shelter camping.

The expandability is perhaps the coolest feature of StealthFyre, and the reason we know that once you get hold of these panels and start using them, you’ll begin to realize the full potential of this unique concept and begin imagining other adventures you can have with StealthFyre. If only you had enough panels. Of course we want that to happen.

What we mean by that is we want to light a fire in your imagination. We want to get you imagining the adventures you can have. We want you salivating to the point that you make them your reality. Because the Great Outdoors is where you belong. And you know it.

All of our stoves are made in the United States on a small scale, and that means the utmost quality. Each kit is made of durable 304 Stainless Steel sheet. Cut, not punched. StealthFyre is not a mass produced product by a massive corporation. It’s the innovative ambitions of an American family wanting to make this wonderful new idea available to the world.

When you purchase your new StealthFyre Modular Survival Stove, you’ll be doing more than getting a great deal on one of the coolest new outdoor products this side of the 21st century. You’ll be doing even more than supporting a small American business. You’ll be helping to bring a revolutionary new era in outdoors adventures to the entire world.

Ready To Purchase The Deuce?

Our Deuce kit is available for $179.99, and we offer FREE shipping on all orders in the United States. If you’re still unsure you want to spend less than $180.00 and save twenty bucks in order to get four functioning stoves, two portable Dakota Fire Holes, a tiny potbelly stove and nearly a dozen more styles of stove, then sign up below for our Newsletter in order to receive a 10% discount code to use on your first order when you decide to take the leap.

Our Stoves Are Proudly Made in The U.S.A.